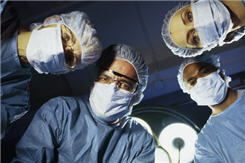 Would-be traders all tend to focus on indicators. The sense, I suppose, is that if there’s just some magic indicator to be added to the chart, then trading becomes easy.

Personally, I don’t rely on indicators. I am price-and-volume based when making decisions on trades, and although I might occasionally glance at a moving average or something, I like to keep my charts clean and put my focus at the roots of all indicators: price and volume.

Does that make me better? Maybe. Does it make me more decisive? Absolutely.

Back when I first went full-time as a trader (remember I already had over 2 years of part-time experience trading), there was a guy in our trading office who suffered from indicatoritis. His monitor was the most colorful thing in the office, but also the most confusing. It looked like a child had taken the entire spectrum of dry-erase markers and drawn all over his screens, a complete mess from which no sense (or cents) could be made.

This was a man grasping for some kind of a signal, but what he actually got was 50 different signals which contradicted each other. His search for clarity resulted in confusion.

That’s not a technician at work, it’s a futile (and wasted) attempt at adding an ounce of consistency to his results. He was looking in the wrong place.

A few years later, I saw a presentation by a guy (who still maintains a pretty large following in the technical analysis community) who “sees” his plays develop from charts with so many indicators that price itself is virtually obscured. Are you kidding? Suffice it to say, I think he derives zero value from those charts in terms of actual trade signals, but rather makes a really good living off confused traders seeking a magic bullet.

Traders by and large rely too heavily on indicators, when it’s far better to use those indicators for confirmation. The price chart should tell you everything you need to know, but if you want some secondary assurance, then an indicator can provide that – so long as you’re using the right ones and at the right time.

Remember this when it comes to indicators: more does not equal better! Simple is ideal.

The hard part of trading is getting out of losing trades and staying in good trades. The hard part is not locating the magic bullet. Don’t waste your time expecting to find the secret to 99% profitability, because it isn’t out there.

A better use of your time and effort is to focus on improving your methods. Even better, improve your mentality, because that’s where the real game of trading is won or lost.